Gillian has won numerous awards most recently The University of Aberystwyth Purchase Prize from the National Print Exhibition.

Her work is in many private collections and public spaces including schools and hospitals. 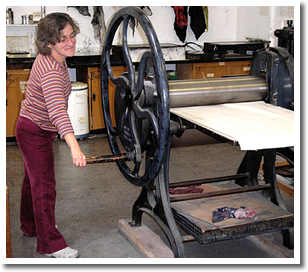 “Hers is a healthy, positive and broad basis for creating an art that is bizarre, joyous and accessible” Jim Anderson, Printmaking Today